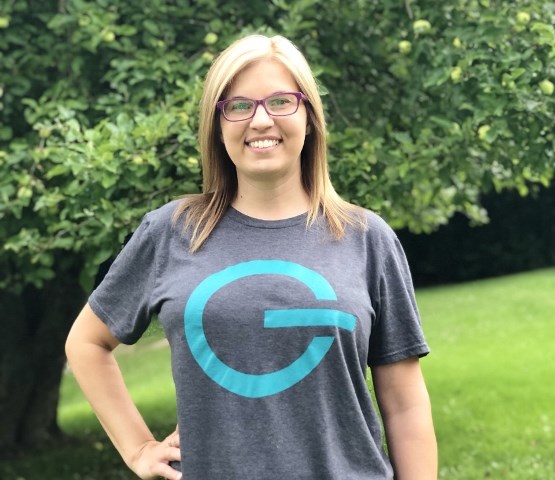 This past April, we at PEG Writing had an incredible experience looking for our first-ever Teacher of the Year. Out of over 30 nominees, we had one perfect score!

Jessica Hrubik dazzled our team of judges with her creative use and enthusiasm for PEG Writing. Jessica has been teaching for 13 years and discovered PEG Writing at the Ohio Ed Tech Conference in 2018. She immediately requested a trial to start in early March of 2018 and has since convinced her building principal to purchase it for all students in grades 5-8, about 460 students, for the 2018-2019 school year.

We had the pleasure of talking with her and getting the scoop on her experience with PEG Writing.

Can you describe your experience with PEG Writing in just a few sentences?
It has been very positive for both me as the teacher and my students. I have noticed an increase in appreciation for the writing process for my students. It’s always been a struggle to get students to revise, and the PEG score that’s available to the students at any point in the writing process gives them a tool that helps them to say, “I need to work on my development,” or “I need to work on my organization.”
The writing analysis on each submitted draft gives students specific writing skills that they know they need to focus on and then they have revision tools to help them.

In your nomination, you said that you were interested in the program because of the AES (automated essay scoring) and you thought it may help prepare your students.
Yes, I had actually sought out PEG at OETC last year because we had just learned that state testing was going to automated scoring for essays, and honestly, as a teacher, I got a little fired up about it. I truly believe that humans have a different set of tools when it comes to grading and reading student work. So I was a skeptic, and I’m still a skeptic when it comes to grading, and I know that PEG does not stress this as a tool for grading. That was one of the things that really sold me.

Do you think it was effective to that end?
It was definitely effective to help prepare students for the end-of-year tests. They are really beginning to learn what PEG looks for. They had gotten to a point where they could predict what PEG would say. They look at PEG kind of like a person instead of a machine, like "Let me see what PEG thinks." And at this point, they've used it enough that the students are able to say things like, "I can tell that PEG will say that my development is weak," or "I can tell that my lowest category is going to be fluency." They've gotten pretty good at that. They're learning a lot about writing because writing is always about audience, like, "who is your audience?" By trying to understand what the audience- in this case, it's PEG- is looking for, they're channeling that and using it to improve.

You also mentioned that your students were more motivated to write and revise than they had ever been. What contributed to this increase in motivation?
I think that is probably going to back to the fact that PEG doesn't give perfect scores, noting that there's always room for revision. I've yet to see a perfect score. I have students with quality pieces of writing and are scoring in the 26-27 zone. With that, they can see that and think, "This is good, but could be better."
For the first time in my career, I'm really seeing the idea click with them that you can always improve your writing, that a draft is never really finished. There may not be mistakes in it anymore, but they are starting to see that "Oh, I can add something," or "Maybe I can rearrange this or maybe I could just break up a paragraph or two," and that is all part of revision. I think that awareness, and that number that they are striving to increase, for the first time, has really helped them to see that revision is not just something that a teacher tells you to do just so that you use all the steps of the writing process.

What would your Top 3 tips for success be?

That’s really impressive for a class average!
It is!

You said that you convinced your principal that PEG was a worthwhile investment. What would you say to other admins who are looking for a writing program like PEG Writing?
The data is really helpful. I like how my Project Manager at PEG always sends the monthly usage, and you can see data in simple bar graphs that the administrators have access to and it really shows that growth. I like that it tracks not just a current writing assignment, but it follows them so you can see every draft they've written, you can get reports for prompts or scoring categories. There's a lot of data that you can use and track, and I like that.

How do you feel about PD and support in your school?
I have been very satisfied with the support from the PEG team. They have been very good with quick responses for the few things that I’ve had questions about. Most things, I was able to figure out, but it’s good to know that I can get my questions answered pretty quickly.

You said that you like to write your own prompts. Tell me about that.
Yes, I do. I almost always write my own prompts and that's one of the things that I love about PEG. Actually, this year, I haven't used any of the prompts that are already made. I can tailor my prompts to whatever my kids are writing about. Sometimes, I don't even enter the prompt itself, I just click on "Student Choice" and then go in and I'll just add the words that I think PEG might catch as a spell check word, so they don't get counted as incorrect. That's another thing that I really like, that I can add in the words and create a dictionary so that authors’ names and fictional places and such don't get spell-checked.

I love that you write your own prompts. Did you ever use any pre-packaged prompts last year when you started using PEG?
I checked them out, but most of my personal writing is based on what I'm already doing in class. I don't typically just have students write from a prompt that's not relevant to what we're doing in class. So that part really wasn't for me, but I do appreciate that they're there. And that you can add stimulus material. That's amazing.

Do you have anything else that you want to share?
I also want to say that I like that I can set the number of drafts because, at the beginning of the year, I typically don't set a number, but then I was actually starting to get a little bit worried that they have become too reliant on hitting that submit button. They’ll change one sentence and hit submit, and then change one sentence or one word and hit submit, to the point where they're not making autonomous decisions or they're just guessing. They're not having confidence in themselves as writers, but as the year progresses, I started limiting the number of drafts. Then, I would open it up before it was due and I would say, "Your rough draft is due on this day, and you're only allowed to give it to PEG once before you make a list of things you're going to do for revision." They weren't allowed to use PEG that whole time that we were revising, just to make sure that they are learning and not just becoming reliant on a program.

I also wanted to let you know that you were also nominated by your colleague, Sandra, who said that you use the program regularly and also trained the faculty on how to use it. She said that your advice to others would be to not be afraid to try it but to play around with it to learn it.
Oh yes. That’s how I figured things out. The more I played around with it, the more I learned how to use it. And the kids will do the same.

Thank you, Jessica, for sharing about your excellent experience with PEG Writing. We love that you are a true advocate for the importance of good writing and for your students.