Meet our 2022 MI Write Teacher of the Year

Meet our 2022 MI Write Teacher of the Year

Our search for the MI Write Teacher of the Year turned up over 30 nominations this year. Our team of judges evaluated each nominee based on effective and creative use of MI Write, as well as advocacy and success. There were several high-scoring teachers, but only one had top marks across the board!

Sarah Salazar, a 3rd grade ELA teacher at Eastside Elementary in Greenbrier, Arkansas, impressed our team with her commitment to learning and using MI Write to help her students grow and achieve great success. I was so excited to sit down with her (virtually) and learn more about her experience with MI Write in the classroom. 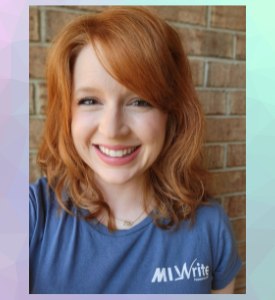 How were you introduced to MI Write? What drew you in?
Our school has a subscription and our principal reminding us to use it. It's the first time I've ever had to use it. I watched a few [videos] made by some other teachers who have used it and I played around with it for a while. Then, I kept getting emails from MI Write about the Power Up meetings and I thought, "They're only like 30 minutes. I can do it after school, on the drive home." So I would have it playing on my phone in the car on the drive home or while I was cooking dinner, just trying to figure it out because our principal wanted us to utilize it. So I started by attended those Power Ups and getting my questions answered and then just figured it out by doing.

Was there anything that stuck out to you in those Power Ups or as you were learning more about MI Write?
From the beginning, when I first opened MI Write and was trying to figure it out, I thought, "Gosh, this would be so much better if I could just show it on my screen for my kids and model it from the student side." I didn't know that was an actual feature until I attended the Power Up and I asked that question. They said, "Yep, that's a feature we have." They showed it on the screen and it was just like 🤯[mind blown!]. That was the moment I was like, "This is good!" Now I can work through an entire essay, or work through an outline on the screen and they can see it from their side on the screen. So that made modeling so much easier.
MI Write also kept me organized. That's a huge plus! And the fact that I can make my own prompts. The prompts that were already there are organized by genre and were really interesting, too.

In your nomination, you mentioned using the peer review feature during your writing conference times. How has this impacted your students?
At first, whenever we would just write on paper and trade to grade, they were VERY opposed. They did not want someone else to see their handwriting. They did not want someone to check their spelling. But having a pre-determined feedback questionnaire that they could just check and write their own comments changed everything! And because I can choose groups as well, it allowed me to arrange them in ways that they would get along and get good feedback. And again, I loved being able to model that feedback with a standard instead of just "Good job, here's your paper." The kids learned how to give more constructive feedback. I really appreciate that the comment is required so that whenever they check the box, they have to give a comment proving whatever they say, giving a specific example or something. I told them if they check something that needed improvement, they have to give an example or a specific way to improve it. So they can't just say "Stronger adjective." They would have to write something like, "Have you considered using this adjective?" and give them an adjective. I think that grew their feedback skills, but it also allowed them to do that independently.

You say you're able to use the different functions of MI Write to create routines for your class. What does this look like? Which features are a part of your regular routines?
The constructed response prompts are how I started to really incorporate MI Write weekly because on the reading test for this year, there were two constructed response questions for which students had to look at one or two passages and then write out an answer to show their understanding. I decided to start using that with my current read-aloud and build it the way they would see on the computerized standardized test. I would read a chapter or two and upload it, and at the end of our literacy period, they would have about thirty minutes to work on it. You don't want the constructed response to take too much time, so every week, I would give them a little less time. This routine allowed them to build stamina for writing a constructed response. I know that it built their confidence, too, because whenever I was walking around during testing, they kept looking at me doing this 👍👍, like, "I know what I'm doing!" And I'd give them a thumbs up back! They were so proud of themselves and I could tell that their confidence levels had increased because they had had so much exposure to that quick-write constructed response routine.

I know your principal wants you all to use MI Write, but what about other teachers, other grade levels? Would you think the math teachers would be on board with it?
I know personally that our 3rd grade math teacher would be fine with it just because she does so much writing anyway and I know that she has to grade a whole lot of writing and it just makes it so easy to have it organized and kept, and with papers... well, you know... 😆 So I know that she'd be willing because I have talked to her about it a little bit and she said she was interested. I think that if there were an MI Write Power Up that was specifically designed for a math teacher, that would be really helpful because it could give ideas, but also just creating those prompts with a math problem or a multi-step word problem, that would be... I don't know, I'm not a math teacher, so it would be nice to maybe hear it from a math teacher's perspective.

If you had to present to decision makers in your school or the district to convince them to keep MI Write during budget cuts, what would you say?
The strongest way of convincing would be to show a piece of writing along with a snippet of student feedback from the beginning of the year and compare it with a piece from the end of the year because there was obvious growth in my students' writing. They got really comfortable with how much they had to write and how often they had to write and you can see it by the end of the year in the quality of their writing and quality of their feedback, in both their writing analysis and peer reviews. MI Write makes it easy to just screenshot all of that data and present it to show [the decision makers].

What do your students think about it? What do they say about it or how do they react when they know it's MI Write time?
You know at the beginning of the year, there was some complaining. I even had a few students that were refusing, like, "I will not open my Chromebook. I'm not gonna do it." But once they got used to those routines, they would ask, "Hey, do we get to do peer feedback today?" And during the writing conference times, obviously they weren't supposed to be talking, but I would hear whispers like, "Hey, I just sent it. Check it!" And then they would go through and look at the feedback or read the essay and I would see them snickering because they would write something funny in a narrative and not in a mean way. Just like, "Oh, this is funny! This is good!" They would type their comments and were really excited because the peer review would allow them to interact with one another. You know, they already want to be social in class and it gave them a more constructive way of being social and there's something really fun about just hitting "send." So yes, they do enjoy it!

That's awesome! What advice would you give to anyone new to MI Write?
Go to the Power Ups, even if you know stuff because I still attended them after I had figured things out and still got helpful tips. It's also just nice to hear how other people are using it and what they are seeing that works.
Also, model an entire essay for your students, like, the entire thing. From beginning to end. Even how to log in because that's not something your students know how to do, especially the younger ones. So modeling an entire essay from outline using one of the graphic organizers to typing it out and hitting submit, and then the peer review.

Who are your biggest influences on social media?
I'm a podcast person, so I LOVE podcasts and I listen specifically to the Stellar Teacher podcast and The Literacy Guys. They're both really, really good, but the Stellar Teacher also has an Instagram that I follow. She's a literacy specialist, and I really like her ideas and her podcast is amazing. I have a lot of teacher podcasts on my list. I also follow Affirmations and Accessibility, and Wife Teacher Mommy. They're both really good, too.

Anything else you'd like to share about you, about MI Write, about anything you think teachers should know?
I would say that there are a lot of writing programs that work and there are a lot of tools that work, and just like with anything else, MI Write works when you use it with fidelity. Using it one time and not getting good quality writing is not really a problem with MI Write. You have to keep doing it. Like with any kind of instruction, you have to model and practice, practice, practice. Keep setting really high expectations for what work should look like and just stick with it. And it works!

Tips & Tricks from the MI Write Teacher of the Year

Tips & Tricks from the MI Write Teacher of the Year

Our 2022 Teacher of the Year, Sarah Salazar, had so many great ideas and uses for MI Write that we couldn't fit them all into one blog post. So here are the rest of her excellent tips and advice for making MI Write work for you!

If you'd like to learn more about how MI Write can help your students achieve their writing goals, contact us today to get started!